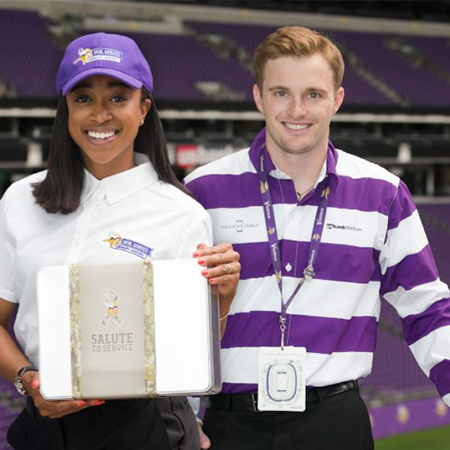 Business Impact Group (BIG) teamed up with U.S. Bank Stadium and designed custom uniforms for SKOL Service Game Day Staff Members. These employees are known as the “Purple People” and “Memory Makers” who are there to help create the best experience possible for guests attending U.S. Bank Stadium! The Purple People are a special set of employees working around the stadium helping customers with the new U.S. Bank Stadium app. Since they wanted them to be “nerd” themed we went with striped polo shirts, striped softshell jackets, nerd glasses and bow ties. As for the Memory Makers, who you will find wearing white, surprise and delight fans across the stadium! These employees are part of the Random Acts of Kindness Group handing out little goodies to kids throughout U.S. Bank Stadium. They also are out delivering Celebration Packs to people during games while in their seats. These include Birthday, First Game, Military and Anniversary Packs which can be purchased through the U.S. Bank Stadium app. We wanted to make sure these uniforms would stand out in the crowd so these team members would be extremely visible throughout the stadium and along with being extremely visible, the garments themselves were made out of high quality materials so they perform great all season!